As big or as small as the ocean.

Home can't be more peaceful than when it is first spring cleaned in summer. Books straightened, cds piled, bed shifted - so the dust build-up can be vacumned and for change - skirting boards damped down with a wet cloth. But our home is very close to the outside world. In a northerly you can hear it throbbing. The door grates, towels whip on the line and the pohutukawa hisses.

A rather fragile looking craft has braved the swells of Evans Bay and is making hard work of it. It is wild out there, and the boat is crashing heavily into the gleaming face of the waves. It makes me think of the ocean. What it is like to be out there. My memories are further stirred by reading Bob McKerrows blog. Bob is an adventurer, writer and humanitarian working in Indonesia and currently visiting Banda Aceh on the 5th Anniversary of the Tsunami. On Boxing Day in 2004 the ocean reclaimed Banda Aceh and many of its people, yesterday looking at Bob's blog the ocean was peaceful, just like some days Wellington Harbour can seem like a pond.

We visited Aceh last year and travelled by boats, similar to those in Bob's blog through many of the small islands off Sumatra's west coast. Travelling from Singkil to the Banyak (many) islands we were hit by a squall and our fellow travellers looked anxious, but on another occasion we sat on the prow of a coconut boat alone on the ocean and watched the sun sink into the Indian Ocean. 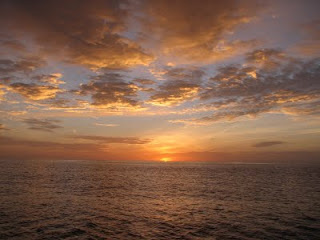 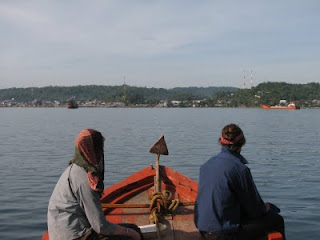 Reading Bob's blog and looking out at the ocean now Indonesia doesn't seem so far away. Our ocean, despite its different name, is the same ocean that washes up against the many islands, its the same ocean that swallowed Banda Aceh that the flimsy craft is still battling against outside my window. Its an ocean so vast, and yet so small, depending on how we percieve it from one minute to the next.

Last night saw the fruition of a little project I have been helping out with, the Great New Zealand Santa Run. I was the manager of the Wellington Event with the Nationalbig boss being Shaun Collins of Lactic Turkey Events. There is a nice write-up about the event in the Dominion Post and on Stuff here.

Grateful thanks to my Santa marshalls for their sterling work, the only errors on the night being mine, dammit! I will post some photos of the run and marshalls soon as... 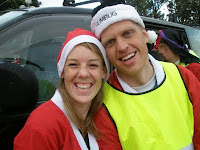 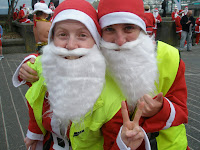 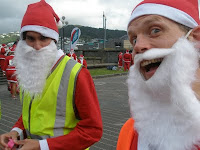 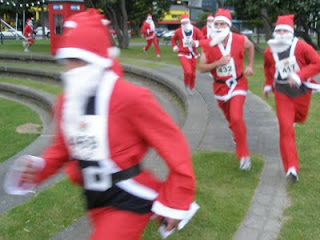 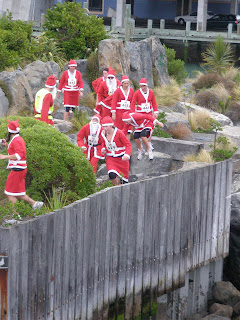 Posted by Unknown at 5:00 PM No comments:

Just some photos from the Weekend.

Filling in the pieces of missions to do around Wellytown. This one was Titahi Bay to Makara Beach, and a bit of a walk back. Jenny, Mark, Chris, Rachel and I started early at Wellington Station catching the train and bus to Titahi Bay. On the way the going was good and the weather improving to scorching so swimming was de rigeur and sunburn post facto.

Not many necessary swims, just one I think for Mark who likes climbing, but plenty of opportunities for getting wet if you so desired. Highlights included the crazy rock, views of Kapiti/Mana/South islands, Boom Rock, Goats and milkshakes at the end. 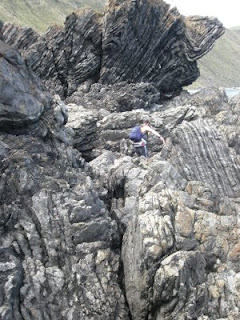 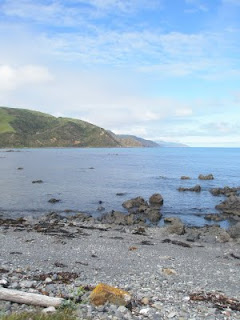 Looking south towards Makara, and the crazy rock 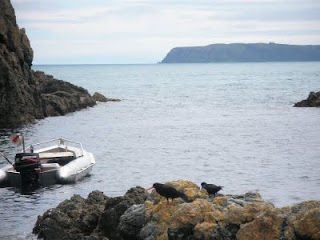 Oystercatchers - Mana from Boom Rock and the team. 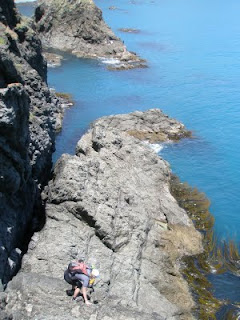 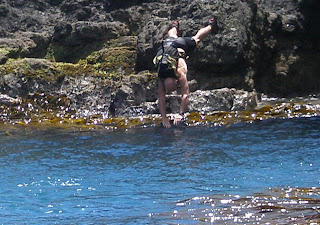 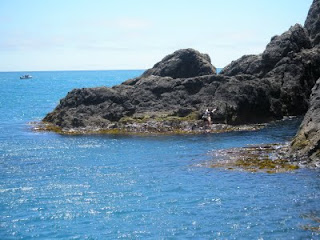 ...and action photo, with close-up of perfect technique

Here's a quick vid from Mick of our trip in the weekend, doubling as a promo for the National Rogaine Champs next April. See us trying stay dry!(and failing)
Posted by Unknown at 12:38 PM 4 comments:

Mt Wainui and the river at the back of yonder

Well I've got mixed feelings about this mission, you see it was a long time coming and seldom have I failed so bad in completing a mission. The idea was great, a traverse of the Whakatikei river from source to sea. But it wasn't to be, among other things my ankle wasn't going to let it happen. Bodies! One day primo the next day poked. Mortality sucks. On the positive side though it was a great afternoon out with a couple of mates; Mick and Ramash, in a neat little part of our world. Here's to that.

The Whakatikei is a rugged part of the Akatarawa range that drains eventually into the Hutt river. It is targeted eventually to be the next dam site for Wellington water consumers. But at the moment it is just a beautiful mostly prisitine hidden gem on the edge of our capital city.

The headwaters of the Whakatikei is the east tending stream in the middle of this (old) photo.

The first task was to get to Paekak, and in true carbon conscious fashion we took the train. Note to self, "trains run on time". Reunited we headed out through Paekak cutting through some farmland on QE 2 park (or maybe not - see land boundary below Mick) to McKays crossing, and then up through the old Whareroa farm which is being actively developed with walking tracks as part of a green corridor from the sea to the hills.

There were no tracks where we were going however. Straight up the hill following a fenceline watching the ocean and Kapiti island grow bigger behind us. 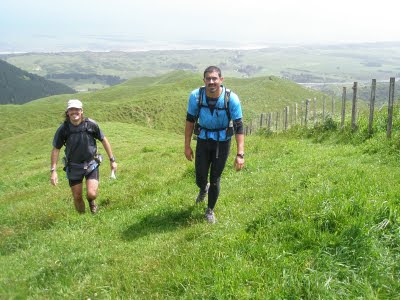 Wainui is capped by a couple of hundred metres of bush and we soon ploughed into this following a rough, but appreciated route, marked by a local DOC ranger, at 722 metres Wainui peers down at a fault line running along its western foot known more commonly as transmission gully, but in the mist we couldn't see much at all. 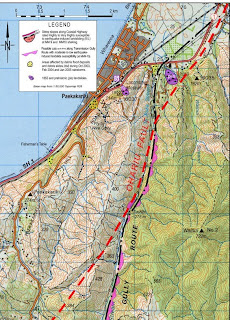 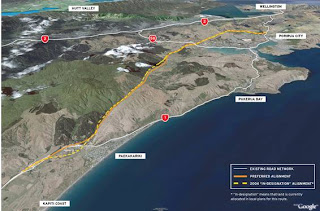 For us there was only time for some preventative foot action. 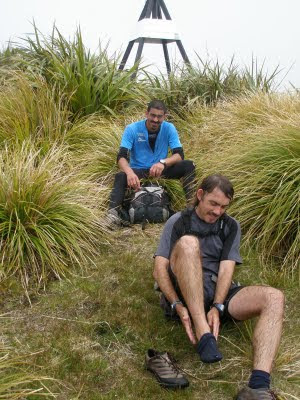 And them it was down into the creek, and what a little beauty it is, slimy rocks quickly give way to bigger grippier bouders or level riverbed to gallop down, and the trees are big, rata, rimu and the other podocarps tower all around when the lower canopy parts from time to time. Or they fall and provide obstacles or features in the gorge. 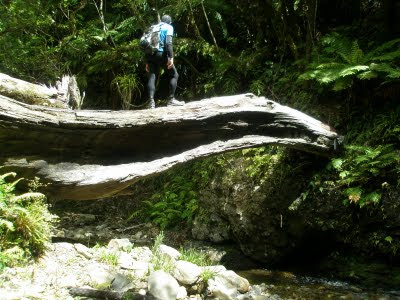 We had the occasional swim or scramble. It wasn't warm out of the sun, but even in the deepest confines of the valley the sun was never far away. 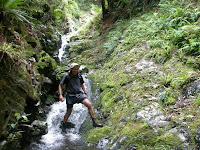 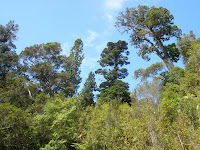 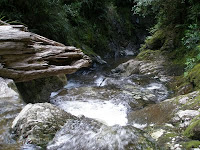 Out eventually, and it was power lines that signalled our return to civilisation, or not. We were at least out of the gorge, but we were still in the middle of nowhere. It made me reflect that in New Zealand some of our best adventures are in "pylon country" where electricity infrastructure required the battering out of roads across hostile terrain. I'm thinking the Borland Road, Dennistoun to Lyall on the Buller, McKenzie pass down south. Pylons can be beautiful with history and nostalgia on their side.

Being in the middle of nowhere we walked around the corner and bumped into "Orange Hut". The mythical heart of trail bike and 4wd drive culture around Wellington. True to its name it is painted Tui colours (as in the beer) and smells of man. Outback man. A concrete silo with bunks its austerity is only just resistant to the the type of graffiti and abuse that huts within reach of petrol powered transportation are subjected to. Mores the pity, it is a good spot.

It was here that we bailed, turning our backs of the further river journey opportuned and heading home with our tails between our legs, following the pylons back to Whareroa and down the hill. A good mission left incomplete for another time.